I'm gonna end this post with some more pictures.
This picture was taken after the dinner cruise. We were in the drive thru line at Taco Bell. lol Cruise food was good, but several hours ago so we needed a late night snack! :)
Here's a shot of Gregg's tat. He got it on his leg. That's where B&K use to run up and hug him all the time. :'( Here are some shots with the kiddos

My sweet little Kaidi is growing up so fast. She loves to sing and dance. She twirls and sways all over the house with her purple tutu dress. She puts that thing on everyday and it typically goes with her if she is spending the night away. She calls it her Rapunzel dress.

This was at her Parents Show after her 2 week ballet camp. I missed it because I was in the hospital and was so upset I couldn't be there for her. I am STILL waiting on the video Gina took for me (*cough cough) ;)
Sweet baby girl also had her tonsils taken out the end of June and thankfully we made it past that recovery. She is one dramatic, can't stop crying, crazy kid on lortab! LOL

My precious Asher turned 2 on July 16. This was him eating his birthday cupcake for dinner that night. He is such a sweet little boy. I am looking forward to having his party this weekend. Just couldn't do it in July with everything that went on.

He loves a riding toy more than just about anything in this world (besides me of course ;) ) and this is what Pop and Nana (My parents, who both have Harleys) got him. He rides it all the time at the house. Everyday! He use to call a motorcycle a "Hotdog" and I had no clue why! lol now he finally says motorcycle!

This lil fella turned 1 on June 14 and the pic tells it all! :) He is WILD!! WILD!! So fun to watch. His personality is SO different than Kaidi and Asher's. He acts VERY much like Kenadi did! Funny since he looks more like her! :) He has been battling a pesky ear infection that will just NOT get better! It will go from one side draining to the other! Just cannot get him well. We ended up having to pull him from his last few weeks of swimming lessons and that was in June! His ear is still draining today. We've been to the ped and ENT numerous times and I'm doing just what the ENT said. So IDK? 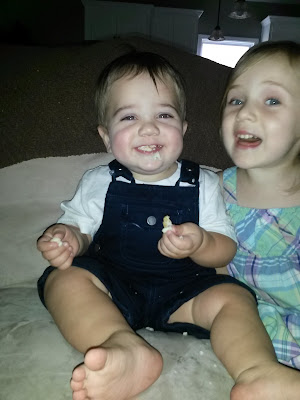 Took this today after church he was enjoying some biscuits leftover from breakfast. He LOVES to eat! And will eat a LOT!

Hope you all have a great week. Kaidi starts her first day of dance tomorrow. She is so excited and that makes me excited for her.
Posted by Meredith Ramer at 10:59 PM