Today I took Atlas to the pediatrician for his 6 month check up. I am a few weeks behind but the poor fellas been a lil under the weather. The week before Christmas, I scheduled all three babies to be seen by the ENT( which resulted in atlas having tubes scheduled to be placed that Friday) Atlas had a very bad ear infection and was starting to get a lil cold since Gregg was in NC for the week fir work My mom took Kaidi and Asher home with her and Atlas went back to Dothan with me. His cough got worse and by the next night he was breathing very fast. I ended up taking him to the ER and he tested positive for RSV. They sent us home and I had a horrible night with him. I didn't really think the breathing treatments were doing any good so I decided to take him to the pediatrician. He admitted him over night and gave him some medicine that would calm him down a little to help him rest better and he had breathing treatments every 4 hours. Thankfully we were discharged by lunch the next day. We continued breathing treatments and oral steroids at home and thank God he was better in no time! I finally made his 6 month well baby check and took him today. We had to wait for quite a while in the waiting room and I had the loudest, sweetest little baby in there.. He cooed and hollered and laughed. He was so good!! Once we got to the patient room, he was still just as happy. He weighed 22 lbs and was 26 1/2" long. Short and chunky!! Lol I ended up allowing them to give him a flu shot and then he had 3 other shots. He was such a little trooper! He's also pretty strong. Nurse had a time holding his legs down to give him the shots. I absolutely love our pediatrician and his staff. They are wonderful and I feel like my kids are just as important as their own when we are there. Here's a pic of my sweet little 6 1/2 month old. I'm also adding a photo comparison of Kenadi and Atlas. Kenadi is the one with the pearl earrings. ;) 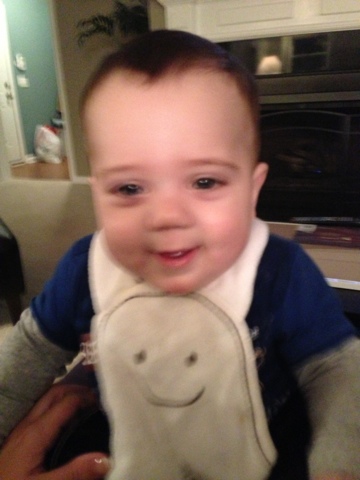 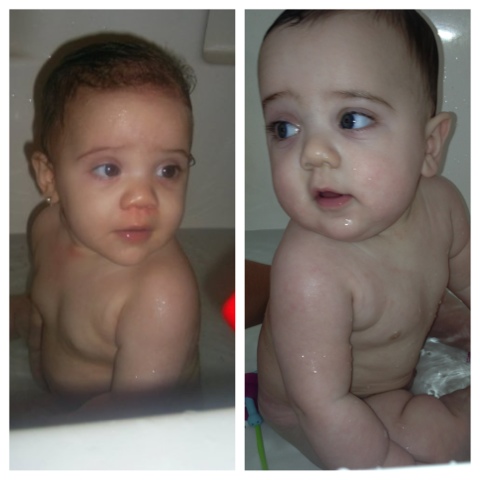 Posted by Meredith Ramer at 9:29 PM

glad atlas is finally feeling better. and he is such a cutie

He looks just like Brayden! I know that melts your heart!