After a week of very hard work, we have grass! I am so proud to look out my front door now and see a yard! I will have to say that getting to the point of "having grass" was NOT easy. It all started Saturday morning. Gregg got on the tractor at 6 that morning and smoothed our yard until everyone else got up. When I got up, Kaidi and I went to Wal-Mart and on our way back Gregg wanted me to stop at the tire store and get them to rotate and balance the tires on his truck. Well, come to find out, one of the tires was separating and could "blow" at any minute and they told me he would need a new one. I had already called Gregg and he was sending our neighbor, Katie, to come and get me. Once I found out about his tire, I called him back and he said he would have to fool with it later. Well I had already put Kaidi in my jeep and I ran inside to tell the guy later and he told me that I didn't need to drive that thing, I did anyway because I was just going home! Luckily I made it! Well I got home and had to rush to get things ready to go to Sara Catherine's birthday party. Gregg comes inside and tells me that he just cut the gas line with the trencher. Great! Said that he called the guy and that he couldn't get up with them and that it would probably be Monday! NO hot water or Gas Stove/oven until Monday?? Holy Cow! Well luckily someone came out immediately and fixed it! After we got back from SC's b-day party, we went to Howard's and had lunch. Then we got back home and the guys got back to work on the trencher! They worked so hard! While they were working and getting the pipes put in place for the sprinkler system, Katie and I went to Enterprise to Lowe's to get the stuff for their sprinkler system. That night Gregg went to sleep very early. About an hour after he went to bed, a flood came. I felt so bad.. I just knew that they were gonna have to trench our entire yard again because ours is nothing but mud. Here are some pics I took during the rain: 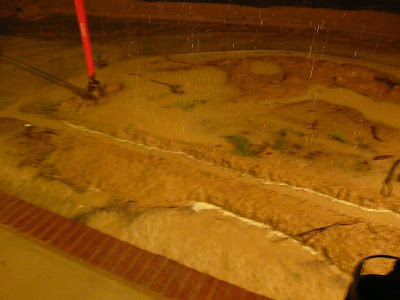 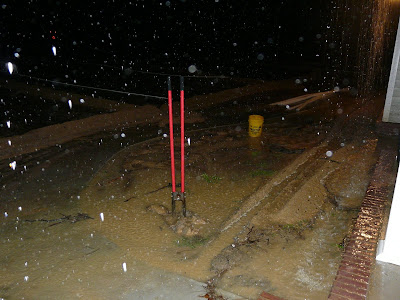 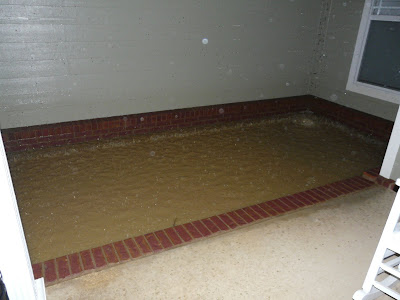 Sunday morning, after Sunday School, we came home and Gregg and Brock got started on Brock's sprinkler system. They worked on that all day Sunday afternoon and just as they finished his, they went to start on ours, and of course it started raining!! Guess it was God's funny way of telling us we didn't need a sprinkler system! :)
Monday morning, Gregg and I got up and got started finishing up the pipes and  covering the trenches. I drove the tractor and covered most of the trenches in the front with it.
Tuesday morning was about the same, we smoothed dirt and tried to get the entire yard ready for the sod that was going to be delivered Wednesday morning. Here is a pic of Gregg and Kaidi on the tractor. She rode on there until she fell asleep, then I got her and put her in her playpen on the front porch and she slept there for about 30 minutes! 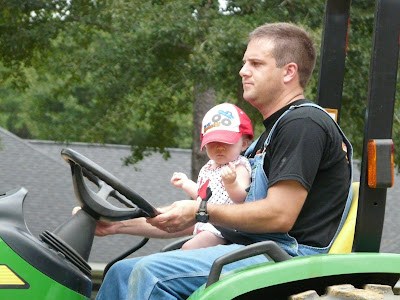 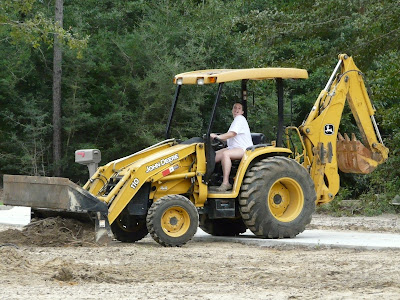 I learned how to use that grapple thing just moments before this. :) 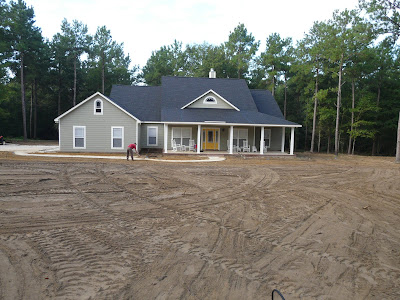 Wednesday morning they delivered some of the sod. Above is a pic of our house at 7:45 before the sod arrived! The picture below is after our first roll was laid! 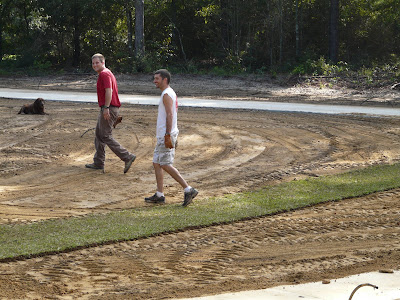 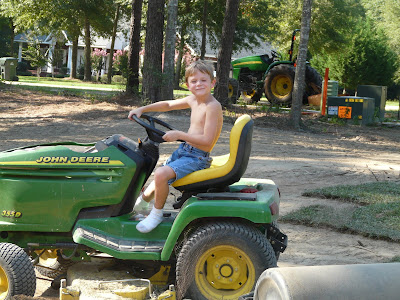 We put Walt and Trey to work on the lawn mower pulling a yard roller around to help push the sod down real well. They enjoyed doing this! 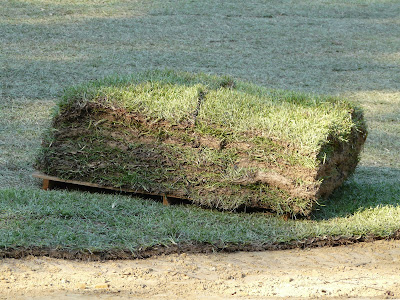 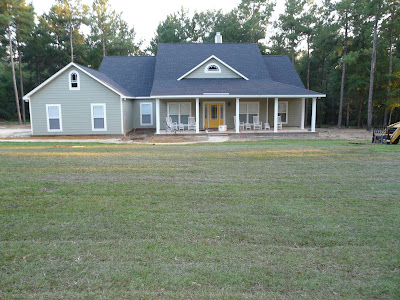 Here is a pic from 6:00 on Wednesday afternoon! We worked extremely hard! We had some wonderful help too. I could not thank the guys enough that came and helped us get this done.
We were planning on doing pine straw yesterday, but it was probably the hottest day of the week yesterday, and we were tired and had Kaidi so it made things a little difficult. We decided to relax the rest of the weekend! Watch some college football and grill some yummy steaks! :) Monday is labor day and Gregg will go back to work Tuesday. I will probably get out and lay the pine straw Tuesday morning (at least the front yard). Kaidi is suppose to have her 9 month pictures Tuesday evening and they are gonna be at our house this time so I want to get the outside done. I haven't had much chance to look for a job this week with being so busy working on our yards, a few of the prospects that I had have fallen through and I have applied at a few places and will be taking my resume around to some more places next week. I hope something comes through soon!
I hope you all have a great long weekend!
Posted by Meredith Ramer at 9:10 AM

Great pictures. I have heard of sodding a yard but never actually saw it. Now I have seen it in your pictures. Have a nice and safe weekend.

Your yard looks great and your house is beautiful! I know you'll enjoy it. Kaidi is so precious and such a wonderful combination of Brayden and Kenadi. You are a wonderful mom! Thanks for sharing with us and have a great week!

I love the yellow door - I think you should put 3 yellow barn stars (if that's your style) in between the garage windows for the kiddo's then plant some moonbeam (yellow flowering grass) it's no hassle plant low growing and look great all summer - I never touch mine.