Have You Seen Charlie? UPDATE: He is safely home!! 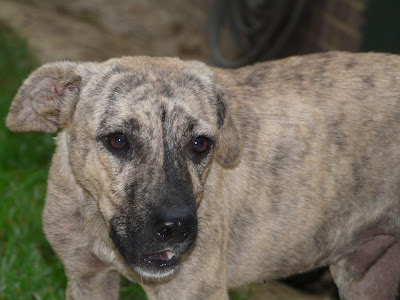 "Oh where oh where can my Charlie dog be?
Oh where oh where can he be?
He went off with Gregg on the tractor last night,
And now, he's lost as can be!"
So, If you can't tell by the title and the song, Charlie is lost! :(
Gregg wanted to spend some time with him so he took him with him to his food plot on the tractor and let him down and let him follow him so he could disk (or is it disc?) his food plot. Well, Charlie followed him for a pretty good ways and as he left that food plot and went to the other that was off another road, he took a dirt road to get there and they passed a house that had some big dogs that came out to greet/BARK at them and Charlie got scared and wouldn't follow Gregg anymore. He kept trying to get him to come to him so he could hold him on the tractor but he wouldn't. So Gregg went and finished his other plot and when he came back, he couldn't find Charlie. He looked again late last night and then again this morning, No Charlie. :(
So, maybe he will turn up soon or someone will see him and let us know.
By the way, we named him Charlie! :)

UPDATE:
So after spending a wonderful 24 hours away from home, Charlie is back at the house! Our neighbor, Jay, found him up near the lake! So thankful that he is ok! Kaidi will be so excited!

Ohhh, that reminds me of the time our little Yorkie-Poo was missing for 10 days. we put an ad in the paper and someone found him. Thankgoodness!! We love him like crazy!! Hope you get Charlie back!!

That is so sad :( I sure hope your Charlie can find his way back to your family. I'm sure he misses you as much as you miss him. It's good you have a picture of him. You could print some missing posters to put in the neighbours mail boxes.