We found Tuff in March of 2005 while riding 4 wheelers in the management area. When we first came up on him I was too scared to touch him because he looked as though he was eat up with mange. He followed us for many miles down the powerlines, even swam through about 3 beaver ponds to keep up with us. As we turned around to head back home, he got further and further behind and started stumbling from exhaustion. Gregg and I both felt so bad for him so I took my jacket off and Gregg went and got him and wrapped him up in it and put him on the four wheeler with us. He laid right in Greggs lap and I held on to him while Gregg drove. We got to the closest gas station, and Gregg went in and bought 2 cans of dog food and you could see his stomach swelling from the food he was so starved. Our plan was to take him home, clean him up and find him a good home. We got him home and our hearts found a little spot for him. We ended up keeping him and he has been the best dog anyone could ask for. He was always so sweet around the kids. Kenadi LOVED Tuff. Everytime I would go outside to get clothes from the dryer, she would run to the back door so she could see him. I can remember shortly after Gregg and I got married, it was a cold night and I went out to get some towels from the dryer and he had some how managed to get the dryer door open and climbed up in to the dryer with the warm towels. Of course, I was furious, but it was also pretty funny. We would take Tuff with us a lot of times when we went for  ride and he was very athletic. He could jump in the back of Gregg's old truck with the tailgate up! There were many times that he would drive me crazy, but he was a good dog! We have a video of him down by the river hiking a football between his legs just like a person. I tried hard to get the video camera to hook to my computer, but I have lost the cd! When we moved over here to our new neighborhood, Tuff has been able to roam free. There are a few of the dogs that like to chase cars. Tuff has NEVER chased cars before, but since we have been over here, I guess the "pack mentality" led him to be like the others. Friday night he chased one of our neighbors trucks, and got too close and was hit. Gregg and I were out of town when we got the call around 9:30. We got home around 10 and Gregg went and got the backho and dug a hole for us to bury him in. I will have to say that Tuff lived a very good life! I think he was such a good dog because we rescued him and gave him a good home. I wanted to share some of the pictures that I had of Tuff. There are few that I wish I could have found, But these will do. 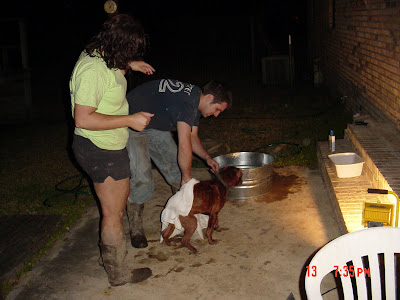 This was the night we found him 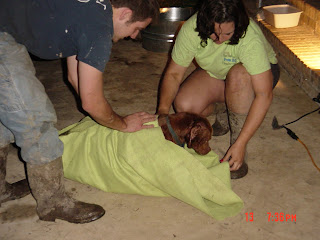 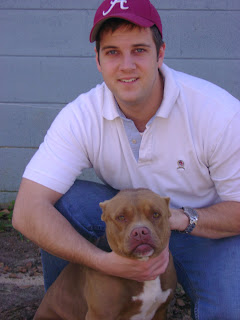 This was taken shortly after we got married. 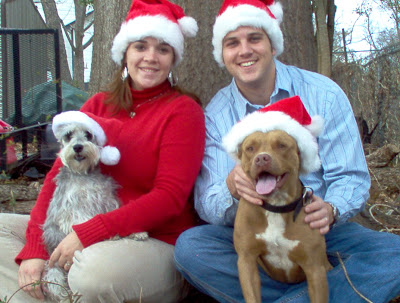 This was our first Christmas Picture as a couple. I was about 4 months pregnant with the twins! 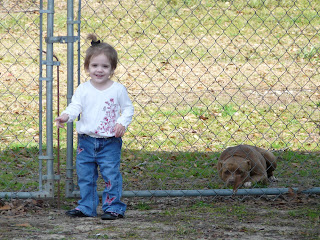 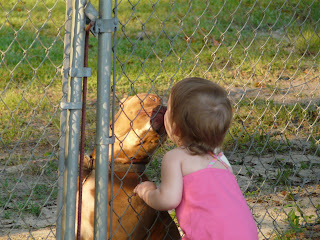 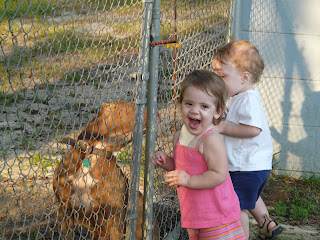 They always loved running up to the fence and petting him! 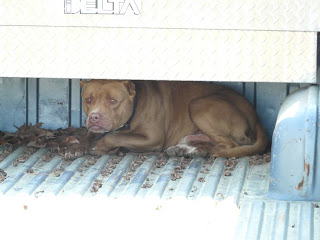 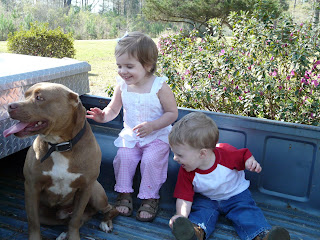 Playing with him in the back of Shorty's truck. 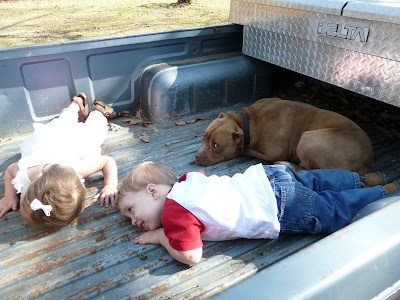 They thought it was funny that he laid down, so they had to lay down too! 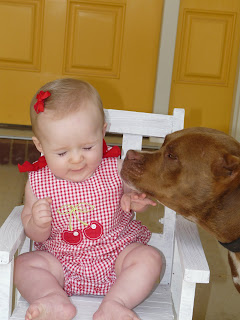 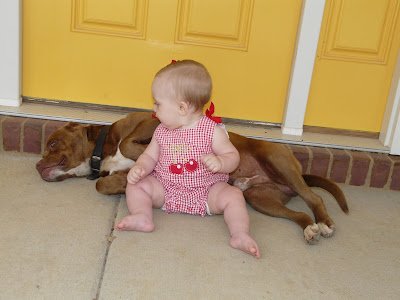 She loved him just as much as Kenadi! 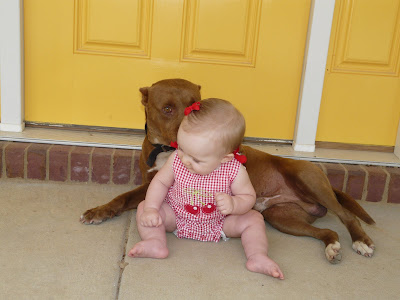 He was very sweet! 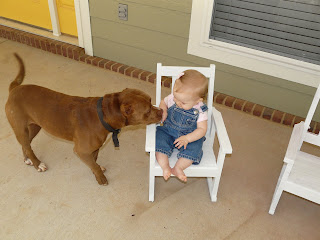 We will miss Old Tuff! Kaidi will miss him too! She always looks for him when we go outside. Guess we will need to be on the search for a new outside dog!!
Posted by Meredith Ramer at 4:18 PM

I'm so sorry about your dog! It's hard to lose a family pet. My husband bought me a beautiful weimerainer for me when we got married. Then we had children. My 3year is terrified of him (and Murphy is a very loyal, sweet, loving dog) and my 5 year old is allergic to him. We are currently looking for him a home. Email me if you might be interested or would like more info. God bless you all!

Well we can look at it like this.... B&K now have Tuff to play with!!! You know the old saying "all dogs go to heaven"... i bet they are having a ball right now!!! ;-) And Tuff could not have been more lucky to have you guys find him, he has had a great life thanks to you Two!!! He was a Great and Loving Dog and we will all Miss him!!!

He looked like such a sweet dog what a good friend he was to all your kids :) I'm sure he'll always have a special place in your family, but yes, for now I too think he's up playing with the twins :) They're probably delighted to see him.

Thinking of you all, Miss Kaidi is as cute as ever!

tears. streaming. down. my. cheeks.

I remember Gregg coming out to the house to do something and he had Tuff tied down in the back of his truck. It was very soon after you found him. I walked outside and Tuff took a leap over the side of the truck. I had to hold him up and holler for Gregg to come put him back in the truck. LOL! You KNOW I am not an animal person!

Awww Mere that was so sweet!! My favorite is B & K Laying in the back of the truck with him.

I am sorry to hear about Tuff...I know he is playing with K&B and K is giving him lots of kisses

I read your blog and love it. Normally I do not comment, but I couldn't help mayself today. I love the post. It was so sweet. Tuff looked like he was a great pet that appreciated being rescued. We have a JRT that we rescued from the animal shelter n Dothan 2 1/2 years ago. She is a wonderful pet. I do wish Kaidi could have had him as a pet to grow up with.

I'm so sorry about the loss of your dog. We just had to put our lab, Molly to sleep a month ago and it was one of the hardest choices I've had to make. I'm still heartbroken over it...I even did a little post about her on my page just like you did for Tuff. They definitely become part of your family and as hard as it is to lose them I wouldn't trade one minute with them...such an unconditional love :) Glad you guys were able to give him a good home and a love-filled life.

I'm so sorry to hear about your dog. My dog died in my arms last fall that I had for 13 years, its hard. They become just another member of the family. He seemed like a great dog!
Praying for you guys.