Where Do I Begin?

I have had a LOT going on the last week and have not had hardly anytime at all for the computer! Kaidi has turned 7 months, ( i will do a post separately for that) She has cut her first tooth, I got rear ended leaving wal-mart and Gregg made a trip to the ER! So like my title says, Where Do I Begin!?Let's see.. I last left off with Game Night that occurred last weekend so I have a lot of catching up to do.
Last week, we called the Pediatrician back because Kaidi had been taking Singulair for 4 weeks and still had the same old mess! The same mess we have been dealing with since April 1! That is a long time to have the croup! He started her on a mask chamber inhaler type thing and there has been a HUGE difference in just the last week! I am so glad that we finally found something that works! Tuesday night I fried catfish and fries and hushpuppies and made cheese grits. It all turned out so good. I was proud of myself since it was the first time I had ever fried fish! Thursday night we had Kaidi's pictures and I LOVE them so much. Lynda did a wonderful job and so did Kaidi (considering she had only napped for about 45 minutes total that day)  Here are a few pics from her "photo shoot" 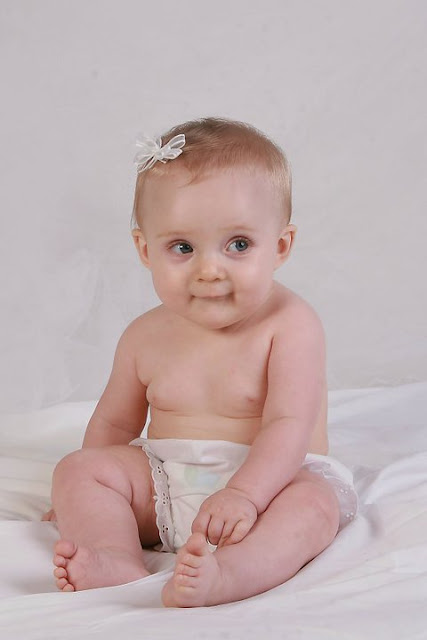 She looks very mischievous in this picture!! 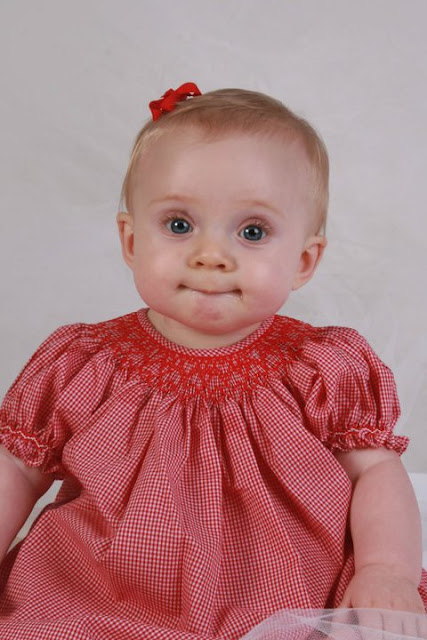 I thought this was her new trick "sucking on her bottom lip" but I discovered a little tooth piercing through her gums last night! Guess it just felt good to chew on her lip!?! 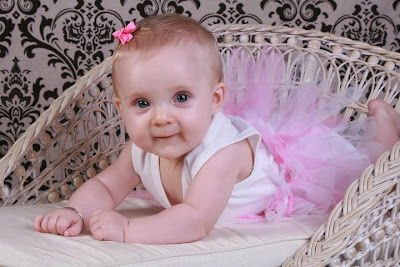 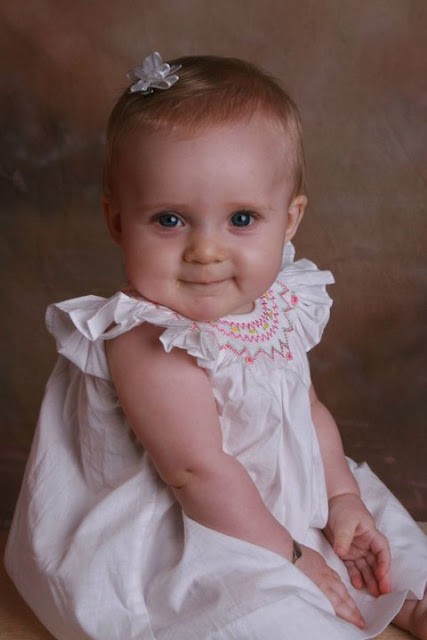 This one is one of my favorites! I believe it will be the one we frame for the house! :)
So.. that takes care of Thursday! Friday, Gregg's mom was scheduled to keep Kaidi and she called about 30 mins before we had to be at work and she had been throwing up so I ended up taking Kaidi to work with me. She was PERFECT!! I had to make a trip to the doctor that morning and she was so sweet while we were there. She napped off and on throughout the day and right after she fell asleep that afternoon, I asked my co-worker if he minded watching her long enough for me to run across the street to wal-mart to pick up my medicine. I wasn't in wal-mart but about 5-10 minutes and back on my way and as I am yielding to pull on to the bypass BAM! Car runs right in to the back of my Jeep. Nothing major, I honestly didn't really know for sure if I had got hit, but I pulled over in the next turning lane and the car behind me followed so I knew that I must have been. That took about 30 minutes and finally I just told the officer that I worked across the street and to please just bring me the paperwork when he finished. I got in and Kaidi had been up for quite a bit and Mark was spoiling her! I couldn't even set her down anymore because she wanted to be held! His wife just found out they were expecting and he really wants a little girl. I figured that would give him a little practice! Ha! :) I got off work and headed home. We had a good evening and a really good day Saturday. We went swimming that morning and tried to get a little bit of sun.. after our swim, Gregg went and bushhogged and I did some washing.. My dryer was out of commission for a little over a week so i washed up 3 loads of just towels and took them to Gregg's grandmothers house to dry them. I came back and made a Jello dessert for Sunday. I wanted something healthy to eat so I decided I would make it to bring with me. I had a flag mold and I used red jello and then decorated the sides with blueberries and strawberries and brought some lite cool whip to go with it. It was really good and my house smelled of strawberries all weekend!! :) I Love Strawberries! Sunday we got up and had some friends come over that morning and we went swimming again. After that we picked up some lunch and headed to Gregg's grandmothers house where his family was getting together to grill out and play volleyball that afternoon. Kaidi and me rode over to Andalusia to visit with my family at my cousins house. I have several pictures from there. I will have to upload all my pics on a separate post! :) We stayed a little over an hour and then came back to Gregg's grannys where we ate hamburgers and hotdogs and then went home. Gregg felt bad all day Sunday and was really worried that he had strep throat. He was up all night with his throat hurting and his chest was starting to hurt as well. He got up at 6 Monday morning and drove to see if the Dr. office was gonna be open that day and they weren't so he went to the emergency room. He was afraid he may have strep and didn't want to give it to me and Kaidi. They ended up doing bloodwork and an x-ray and he has an upper respiratory infection. The prescribed him some anti-biotics and sent him home! I basically just sat around the house all day Monday. A guy came and fixed our dryer around lunch so i was able to wash and DRY my clothes! :) I made up a cheesebuger lasagna and when Gregg got in from bushhogging I went to the gym and did a little cardio! I started working out Friday and have made a commitment to go in the mornings before work. I did well Friday and again this morning. It's gonna get tougher tomorrow though because Gregg and I will start riding together to work since he is in Andalusia now. Plus next week Kaidi's ISR lessons start and I will have to get up a little earlier for that too. That's the gist of how my past week has been. We had an overall good weekend.. Enjoyed our 4 day weekend.. and enjoyed sleeping in!
Posted by Meredith Ramer at 11:18 AM

Adorable pictures! Man, is she cute :)
I love the red dress!!

I enjoy reading your blog, and this is my first time leaving a comment. I had to leave a comment today because I am very curious to what "bush hogging is?" Glad you had a great holiday!

ha- bush hogging is when you pull a "bush hog" behind a tractor to cut a large amount of grass/brush.