We have taken Kaidi to see the doctor 3 times now in the past week. She just can't shake this croupy cough. I took her back this morning because she had a very "juicy" cough this morning and could hardly even take her bottle from coughing so much. She was just as happy as could be sitting in her car seat in the waiting room. I just knew she was gonna make a liar out of me! :) We ended up being sent to the hospital for a chest x-ray and a barium swallow (i think that is the name of it) Kaidi also has a problem with spitting up all the time. He swapped her formula and gave us quite a few instructions on her medicines. Right now she is taking 2 different things in her breathing treatment, an oral steroid and this morning he told me to add prevacid to that list of meds. We will do this for a week and if she still isn't better we will go back. He thinks that she may be developing asthma. Gregg's mom has asthma pretty severe so it is a possibility. I had to take Kaidi to the hospital where Kenadi died and it was a lot tougher than what I thought it was going to be. I thought I would be able to do like I always do and push my emotions out of the way just to "take care of things" But you know, it's amazing what your sense of smell can bring back. I have never really broke down like I did today in public. I felt bad, I know I shouldn't have because I had every reason to be overwhelmed and emotional, but for once I was faced with something that truly made my chest hurt and I couldn't control my emotions. The girls in there were so nice and took Kaidi for me while I got things together. They did her chest x-ray while I signed the paperwork I needed to. Thankfully, I didn't have to go to admissions (which is in the ER). They brought it to me in the radiology department. I went back in to the x-ray room while they were finishing up with Kaidi and was able to assist them in the barium swallow. I could see on the screen that she did have a little bit of reflux. We finished up that and I loaded her up and headed to Andalusia. I brought Kaidi to work with me today. 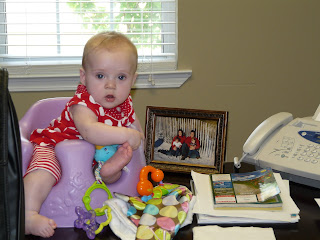 Here she is sitting on my desk in her bumbo seat.
I guess I should add how our weekend went. It was a busy day Saturday. Gregg pushed 8 trees over in our yard and cut them all up and hauled them to either the front curb for the city to pick up, or to the back of our property. He was exhausted! I did some cleaning inside the house and entertained Kaidi bug!  For Mother's Day, I got a Cricut machine! I was very excited about this!! :) I have been wanting one for quite some time now! We had a tough day, but we spent time with friends and family and made it through. Thanks for all of the prayers and love.
Posted by Meredith Ramer at 2:16 PM

I'm so sorry it was such a difficult day for you. I'm praying.

That must have been really tough Meredith. I wish you didn't have to go through it all...

Praying for your strength and peace of mind...

Your little Kaidi Bug is as adorable as can be, I hope she is feeling better soon!

I am sorry you had to go back there...
Preying for you guys
and little Kaidi to get better soon

Hopefully Miss Priss will get to feeling better soon.. The prevacid should help! Remind Gregg to give you the card with the Alimentum I sent him.. it's a "gold card"... haha.. they send you a case free! :) I was worried about you this morning when he sent her for the labs..I felt like it was going to be tough.. Praying for you Meredith.. anything I can do, let me know!

Poor Kaidi, I hate she has been so sick lately :(
Glad you made it through this weekend, I've been thinking about you!

I know where you are! About a year after we lost our son 22 weeks into our pregnancy, I had to go back to the doctor's office where we found out we lost him. I thought I could do it up until I walked through the front door. I literally froze and tears streamed down my face. I could barely speak to the nurse at the front desk and ended up just turning around and leaving. It is amazing that a place can draw such emotion. We THINK we are in control but we aren't God is and I keep being reminded of that like I was that day. You are amazing and my heart and prayers are with you.

Why didn't you breastfeed? You could have avoided all these GI issues and probably the lung issues too.