Sorry it has taken me so long to upload these pictures. I have so much going on when I get home in the evenings, that I rarely have time to get on the internet! So here are a few pics from my first baby shower. I am having a diaper shower this Sunday and I will eventually post some pics from it as well. 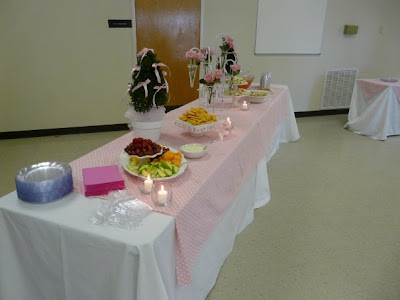 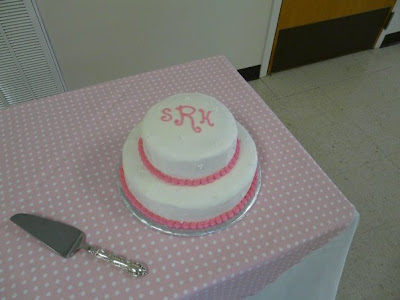 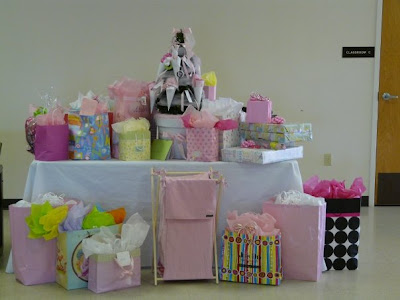 All the goodies BEFORE! :) 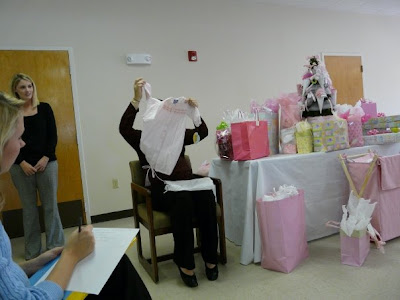 Opening presents. This is Kaidi's coming home outfit that Delicia got her. :) Thank Delicia! 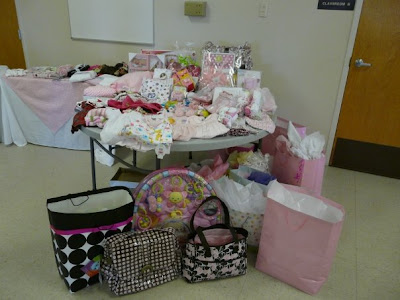 All the goodies AFTER! :) 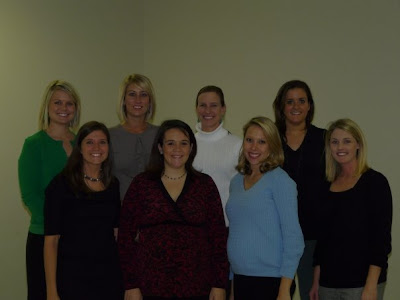 My hostesses: (back l-r) Toyia, Lindsay, Amanda and Jan
(front l-r) Kelly, Me, Ashton and Tabitha 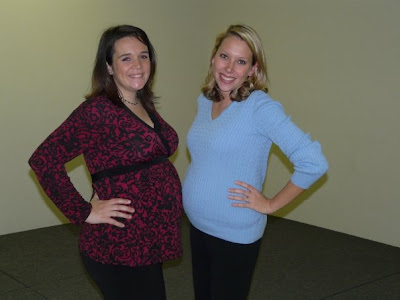 Me and Ashton. Ashton is my "BFF" and is having a little girl, Caroline, in January. I can't wait for Kaidi and Caroline to grow up together and be great friends like we are! :) 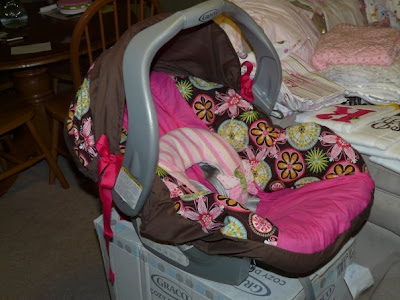 Kaidi's AdOrAbLe Car Seat cover that you can find HERE 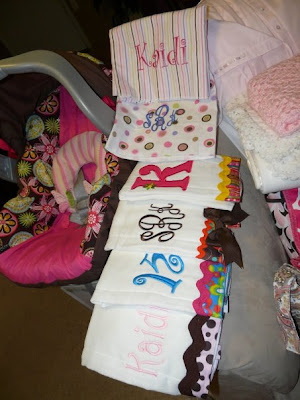 Some of the monogrammed goodies.. She will spit up and burp in style! :) 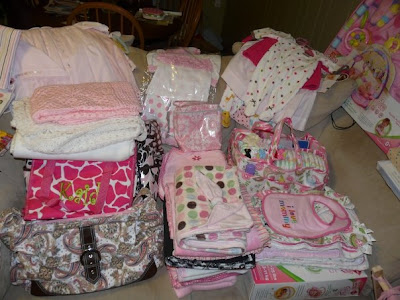 All Stacked up on the love seat. 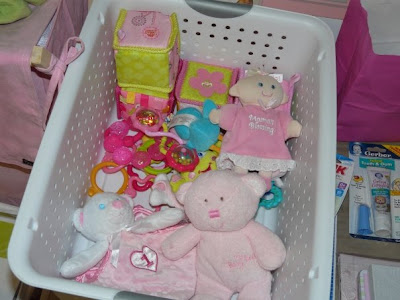 Some of her toys 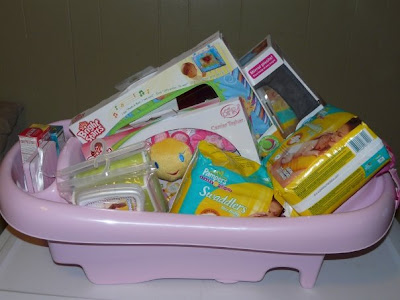 This came from Gregg's bank. They gave us a lil shower one day during lunch and had this baby tub filled with all sorts of things. 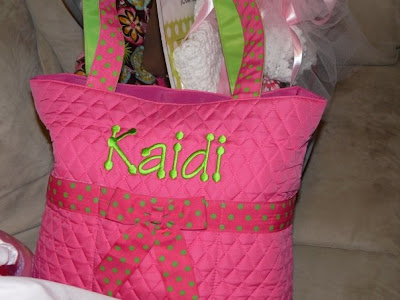 This is a cute bag that I got this past Sunday from someone and I filled it up already with the stuff for Kaidi that I am taking to the hospital! :)
I am so excited and anxious and nervous and excited (did i say that already?) for Kaidi to get here. I think I have everything ready with the exception of  few things. I have made a "Last minute Grab Items" list that we will have to throw in the suitcase just in case I go in to labor before December 1. The very first item on that list is the video camera! We forgot it when I went in to labor with Brayden and Kenadi and I want to make sure we have it this time. I would go ahead and pack it in the car, but Gregg uses it when he goes hunting so I just have it on standby! :)
Gregg and I had a little bit of a talk last night about Miss Kaidi. We both felt a little convicted because we haven't really looked at her with the excitement that she deserves. We are excited, but it has been more on a "what she can do for us" kind of excitement. We haven't really thought about all we get to share with her. I think we have started thinking of her more as our little girl now instead of our band-aid! It is hard, it's as if we are afraid to call her our baby girl because that has been Kenadi's title for so long. We both know that she will not be replacing Brayden and Kenadi, but we also don't want to take away anything from them.  I opened Kenadi's baby book last night to put her little Bible in it that her Uncle Adam, Aunt Heather and Addison had given her. I also came across her "soothie" pacifier that she had when she was a baby. It still had a pink dot on it from where I marked it so we could keep it separate from Braydens.  As I sat there with her baby book opened, I flipped to the section that had all the stuff stuck in it. Her "unofficial" birth certificate with the tiny little feet prints on it. They were so small. I couldn't stop the tears as I sat there and thought how wrong it was that I had sat the very night before and looked at her death certificate. The time of her death, the cause of death, the very hospital where she was brought into this world was the very hospital that she left this world. I opened Brayden's book to put his Bible in there and there sat his first lock of hair. It was so much lighter in color than the hair clippings from the funeral home. In the book, it had a place on there asking what my wishes for him were and I had written, "To be healthy, happy, smart and to stay young forever"  Those words constantly pierced my heart. I didn't really mean it God. I have noticed myself constantly watching what I say now, in fear that God will take it literal. I know that God was in no way allowing that to happen all because I wrote that in each of their baby books when they were a month old, but it does hurt to think that I ever said that. I may have mentioned this before in a previous blog, I am unsure, but right after Brayden passed away, I remember breaking down over something that I had said many months before. I told Gregg that I wanted to have another baby because I wanted to see what it was like to have one little baby instead of two.  And that immediately came to my mind after the realization that I was only gonna have one little baby in my house. Why do words come back and haunt you sometimes? Or even little sayings have a completely different meaning to me now. My friend Ashton and I had a yardsale about a month or 2 back and she had a piece of wall decor that said, "A moment in my arms, forever in my heart" and most people would look at that and think about how quickly their babies grow up. I look at it and see how quickly mine were taken from me and the only place I have them now is in my heart. Words are so powerful and touching and heartbreaking.
Posted by Meredith Ramer at 10:17 AM

I think about you often and hope you know there are lots of people in the world that are praying for you and your family.

Can you please let me know where you got that bag? It's adorable!!!

Gosh Meredith you are just so pretty ~ you look so cute pregnant! I love all the little girly things you got for Kaidi...especially that bag :) I'm a big fan of ANYTHING monogrammed...especially for kids.

I'm glad that you and Gregg are getting excited for her arrival ~ she will never replace Brayden and Kenadi for sure and won't replace your other "baby girl", but I'm one of 3 girls and I know we all 3 are our parents "baby girls". So I think Kenadi would be happy to share that title with her baby sister. I hope and pray in my heart that God will put happiness and purpose back in your lives with Kaidi but I know that he also put you and Gregg in her life b/c of the amazing parents and christians you are and what that will give her. (((HUGS)))

I know what you mean about words! When we lost ours last December. I had said to Paul when we found out I was pregnant on the first try of fertility treatments we should have waited a little longer as a joke…only to regret those words so soon. I can't tell you how many times that pops into my head and I just break down. I would have never dreamed that it would all be taken away. And now it is coming up on the anniversary next month and it is so hard. I know this doesn't compare to your loss b/c I never saw mine. I am very careful about my words now especially since we haven't been able to conceive again. I pray for you both often. You two are some of the strongest people I know. Mere, your blog speaks to my heart. I have felt so many of your emotions and just locked them up inside. You are so brave to speak them out. Thanks so much for sharing.

Okay, first of all, you may be the cutest pregnant gal ever!! So darn adorable!! Love the pics of all the darling stuff you got for Kaidi and I LOVE the bag...I may have to get one for my girls.

I think of you guys so often. I am happy to hear you guys are getting excited about Kaidi. I pray that she brings some joy and purpose back into your lives and I can not even imagine what it is going to be like to when you get to hold her for the first time.

I am looking forward to "meeting" Kaidi and seeing pics of her. I will be thinking and praying for you the next couple weeks before she is born.

Thank you for being so brave in your blog. To pour your emotions out the way that you is touching so many people in so many different ways. You are such an inspriation to so many.

I think of you every day and my heart goes out to you and Gregg ...