Busting a Tire or I should say Tires!! :)

Yesterday, Gregg decided he wanted to come over and have lunch with me. Well we left my office and headed to the eating place and Gregg hit a big, deep pot hole and about 50 yards later a tire was flat. We flopped our way into the parking lot of the eating place we were heading to only to realize they were closed on Mondays. :) So Gregg gets out and puts the spare tire on the accord.. here are some pics :) 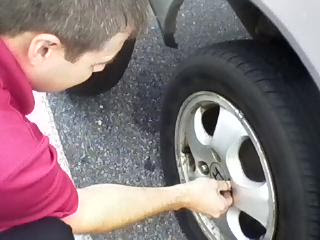 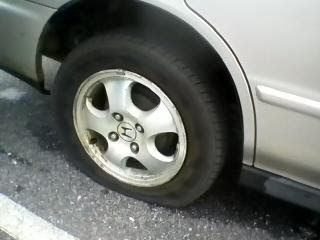 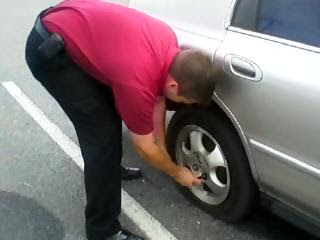 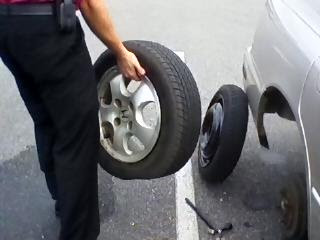 Once we got the "donut" in place, we headed to another eating place. After that we decided to go to wal-mart to see if maybe they could patch it for us. Well after waiting an hour and a half at wal-mart, they tell us they are unable to patch it and will have to replace the tire, we told them to put the donut back on it and we would take it to the tire store where the original one came from. I had to leave work early because the tire store closes the same time my office does and he followed me to Opp to the tire store. Ended up having to get a new tire anyway for $80. :( Oh well.. I headed home and made a grocery list and headed to the grocery store and Gregg headed to put up his new lock-on tree stand at the hunting land... He comes in about 7:30 that night and says, "well I am 2fer" and I was like what??? He busted the tire on his dad's truck at the hunting land and had to leave it down there until he could get back in there to change the tire out. It was too funny.. I had to laugh.. which made Gregg laugh a lil more too.. well about 2 hours later Gregg realizes that he has left his wallet in the truck so we had to take the Honda Accord to the hunting land and about 20 yards before we get to the turn in for the hunting land the bottom falls out and Gregg has to walk in the pouring rain to get his wallet out of his truck.. hehehe... what a day!! :)
Posted by Meredith Ramer at 8:55 AM

Randall @ Happy For This Moment said...

As my mother always says, "if it is not one thing, it is three!"

still praying for you all.....

What a day! I certainly hope today is better.

I have never left a comment but I check on you often :) I think about you and pray for your family daily. You are truly an amazing woman!
Now with that being said.. you crack me up with the hunting thing. My husband is a HUGE hunter pretty much obsessed. No one understands unless your married to one haha. Anyway hope you guys have lots of luck this season:)...

Meredith, just hang in there. God has some wonderful plans for you and Gregg. You two are so special!!!!