SO! How do I begin!! It was not a pleasant day to begin with but turned out to be a great birthday! I woke up early that morning around 2:30 to hear Brayden screaming to the top of his lungs.. I went in and picked him up and rocked him back and forth trying to get him back to sleep.. no luck so I brought him to bed with me.. well by now he is wide awake and wanting to talk.. he kept saying "mama.. seep" "mama...seep" yes it was adorable but overtime became very annoying.. I would say, "Brayden close your eyes and go to sleep" then we would play the face game.. "eye, dose, mow, teef" I would smile and say, "Brayden, go to sleep".. then he would say "dada seep" "mama seep" Finally I just had to put him back in his bed!
So.. waking up again around 6:45.. I hop in the shower, get out and wrap up in my robe and walk into the living room.. I heard this loud thumping noise that sounded like someone had pulled up, so I look out the blinds.. I don't see a car but I do see a little head on the other side of my car and my passenger side door is beginning to open.. so I snatch open my front door and yelled to the boy, "HEY WHAT ARE YOU DOING?" and he says, "ummm...uhh..I was just looking in your car." and I say, "well, it sounded like you were kicking it.. get outta here" so he grabs his backpack and starts heading towards school...well I slip on Gregg's crocs and go to look to see what the kid was doing.. well I get to the other side of my car and see a HUGE rock/boulder (the kind like you see under a bridge) and dirt just all over my car... boy did I turn into my mom... I ran inside and threw on clothes as fast as I ever have in my life and hawked him down while calling the cops on my cell... long story short.. did the police report, boy was already suspended, also stole a bike the night before, and got his dad's # so that I can call them when I get an estimate! Kid put 2 dents in my door/window and also had a couple of scratches on my doors and windows... He was trying to throw it through the window.. poor kid didn't have enough sense to check that doors were UNLOCKED!! So this is how it all started... I was an hour and a half late for work and the breakfast that they had cooked for me for my b-day was cold..
Here are 2 pics from my car: 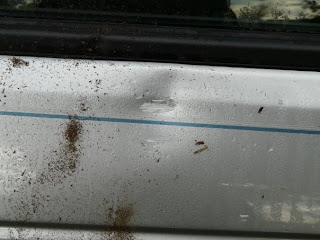 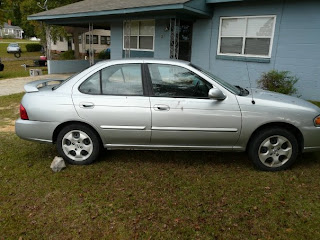 See the size of that rock!!

The day rocks on and I get a beautiful arrangement of flowers from my darling husband... then I get off of work and get ready for my dinner party! We meet Jeremy/Hannah, Kyle/Toyia and Jonathan/Amanda at the Church of Christ and head to Enterprise to Miyori Japanesese Steakhouse for some good eating and great fellowship! Scott, Gina, Anthony and Tonya also came and just met us there...I have a few pics!! The ones when they sang happy birthday to me were a little blurry, so I only have one of them posted... 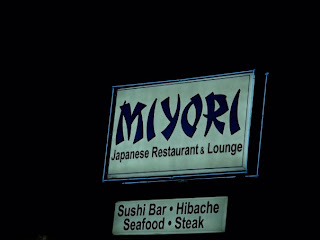 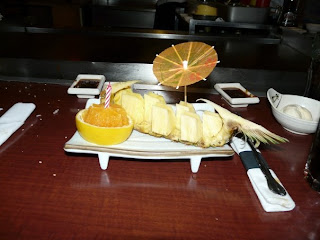 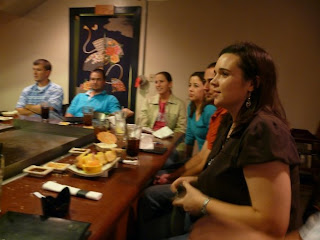 The next morning Gregg and I woke very early (4:00) and rode up to Luverne to go hunting with Trey Burgess at their land.. I took the video camera with me and filmed several turkey and I think we got 6 deer on video.. I filmed a doe and yearling for a very long time! They were only about 15-20 yards away from us.. it was truly a blessing to see!! Gregg didn't shoot them b/c they were small!! We hope to go again soon together!! I really enjoy going with Gregg and being involved in his hobbies!!